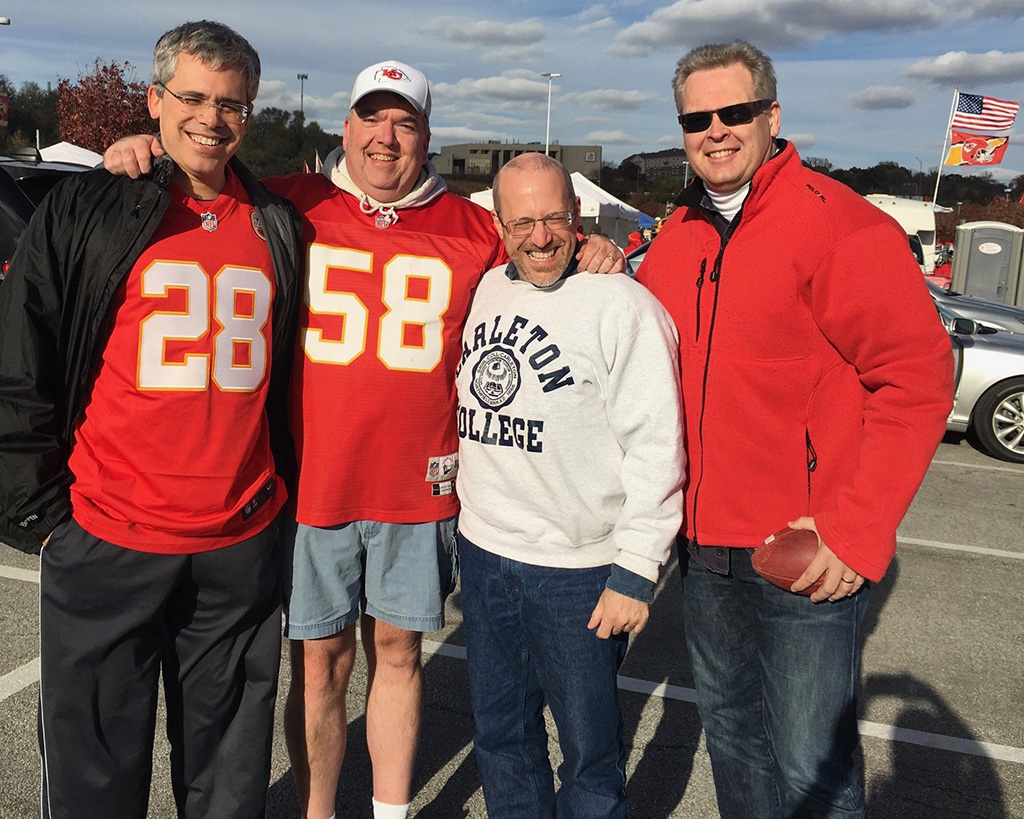 I grew up in apartment complexes in South Kansas City, just my Mom and me, and it is a special thing to be able to co-found a firm with which I can practice part of the time in my hometown. Kansas Citians of a certain age may remember the President Gardens apartments off 82nd & Troost. That’s where I grew up and where I learned my first life lessons, such as this: If a bully tries to intimidate you, hit him first. Hard.

As a kid I was fortunate to be welcomed with open arms at the nearby Jewish Community Center, where I saw the value of inclusion, generosity, and humility. I practically lived at the JCC, where I played every sport they offered and began internalizing the uniquely satisfying power of a good team. Our strengths are stronger, and our weaknesses shored up, by teammates who put the team’s needs above their own. I’m of another faith tradition, but I believe in and try to live the values the JCC taught me.

My life’s path took me to Carleton College, which opened my eyes to the rest of the world, and the University of Michigan, which launched me into the law. I learned how to try cases from some incredible mentors at Robins, Kaplan, Miller & Ciresi, where I spent my first 17 years as a lawyer. At Greene Espel, where I spent the next 12 years, I got to work alongside extraordinary people and legal talents who organized themselves around the most egalitarian principles I have ever heard of for a law firm. I am grateful for my time at both firms and will always be their fan and active supporter.

Our founding of this new law firm is a profound thing for me. After the first two acts of my career, I am entering the third at the absolute top of my game professionally. I believe that my colleagues and I can take on anyone, anywhere, and win. But co-founding this firm allows me to wrap together the places of my youth and my adulthood, along with lessons I’ve learned along the way, to help create a nimble, potent firm whose culture and ethos center around trust and team. This is what I am passionate about. This is the core of our firm, and it is the core of our relationship with every client. We strive daily to be a force for good and truth for our clients and our communities. We look for ways to collaborate, even with adversaries, but we also stand ready to fight for our clients and for justice. When others are acting dishonorably, or when a bully tries to intimidate you or your company, call us. We’ll team with you, and we’ll hit hard.

Bob Gilbertson is a trial lawyer’s trial lawyer. He has handled litigation and arbitrations in 35 states for clients pursuing or defending claims involving business disputes, non-competes, intellectual property, products liability, insurance, and industrial catastrophes. He has tried cases in all of these areas, and has on many occasions been engaged specifically for trial when settlement prospects have faded and the specter of trial has become more real. Bob has developed substantive expertise in several areas of law, but, regardless of subject matter, his core competency is in the courtroom. He asks the kinds of questions judges and jurors would ask, and helps make complicated ideas understandable.

Clients turn to Bob to handle disputes of many kinds:

Bob has been handling business disputes for 29 years. Clients turn to him to protect their interests in disputes over contracts, fraud claims, and all manner of business torts. Bob has recently, for example, successfully represented a national-brand-name software provider defending against contract and fraud claims, a university accused of fraud and misrepresentation, and a pair of business executives pursuing contract claims against a Fortune 150 company. Bob led a team that represented a Fortune 100 company and won summary judgment, affirmed by the Eighth Circuit (Superior Seafoods, Inc. v. Tyson Foods, 620 F.3d 873 (8th Cir. 2010)), on fraud and other claims arising out of the purchase and subsequent sale of a business.

Clients in the consulting, high-tech, food, manufacturing, medical-device, and other industries regularly ask Bob to advise them when adding or losing key employees, and to handle the litigation that sometimes results. For example, Bob worked with co-counsel to score a key victory against a medical-device giant in Medtronic, Inc. v. Ernst, 182 F. Supp. 3d 925 (D. Minn. 2016).

Bob has deep experience pursuing and defending patent, trademark, trade-secret, trade-dress, and false-advertising actions. He has led many successful efforts to enforce IP rights or defend against such claims. For example, he led teams that won a judgment of non-infringement in Reshare Commerce, LLC v. State Farm, et al. (D. Minn. 2013) and a dismissal of a patent-infringement action in Ductcap Products v. J&S Fabrication (D. Minn. 2009). He is at home in district courts, the International Trade Commission, and the Patent Trial and Appeal Board. Bob focuses on learning the technology involved in IP cases in a way that will help him teach it to judges and juries.

Bob represents clients in Multi-District Litigation proceedings and class actions alleging fraud, antitrust, RICO, and other claims. For example, he secured summary judgment in a putative nationwide consumer class action in Edwards v. Danka (M.D. Tenn. Oct. 17, 2006). Across 16 different states, Bob has defended 36 putative class actions, some seeking billions of dollars in damages. The one litigation class that was certified in those cases was reversed on appeal.

Bob has handled dozens and dozens of property, liability, and other insurance-coverage disputes and enjoys the contract-interpretation challenges that they present. The client he and his team represented prevailed, for example, in such a dispute in St. Mary’s Foundry v. Employers Ins. of Wausau, 332 F.3d 989 (6th Cir. 2003).

When a major fire or explosion occurs, Bob helps clients navigate loss investigations, insurance claims, and litigation over insurance and liability issues. He has represented clients in litigation arising out of large catastrophes such as the 1991 Americold warehouse fire in Kansas, the 1999 Olympic pipeline explosion in Washington, and the 2009 North Star Foods fire in Minnesota. In 2010, a client Bob represented prevailed in an Iowa Supreme Court decision (Royal Insurance v. FM Global, Iowa 2010) dismissing negligent-inspection and breach-of-contract claims. He has brought and defended dozens of claims arising out of such disasters.

Bob has handled or consulted on appeals in a dozen different jurisdictions. In 2008, for example, he argued the appeal in Hackert v. First Alert, 271 F. Appx 31 (2d Cir. 2008), in which the Second Circuit affirmed a district-court judgment in favor of the client he represented. Bob enjoys the intellectual challenge of appeals and finds his appellate experience helpful at the trial-court level as well.

Since the first month of Bob’s career, he has represented refugees seeking asylum in the United States. For example, he led a team representing a young man from Somalia in Hassan v. Reno, Civ. 00-01091 (D. Minn. May 3, 2000), in which a team he led obtained a temporary restraining order barring a deportation. Bob deeply appreciates the chance to represent clients in the thing that is most important in their lives. If you want to hear a remarkable story, ask Bob about his first asylum client.

“And where does magic come from?
I think magic’s in the learning.”